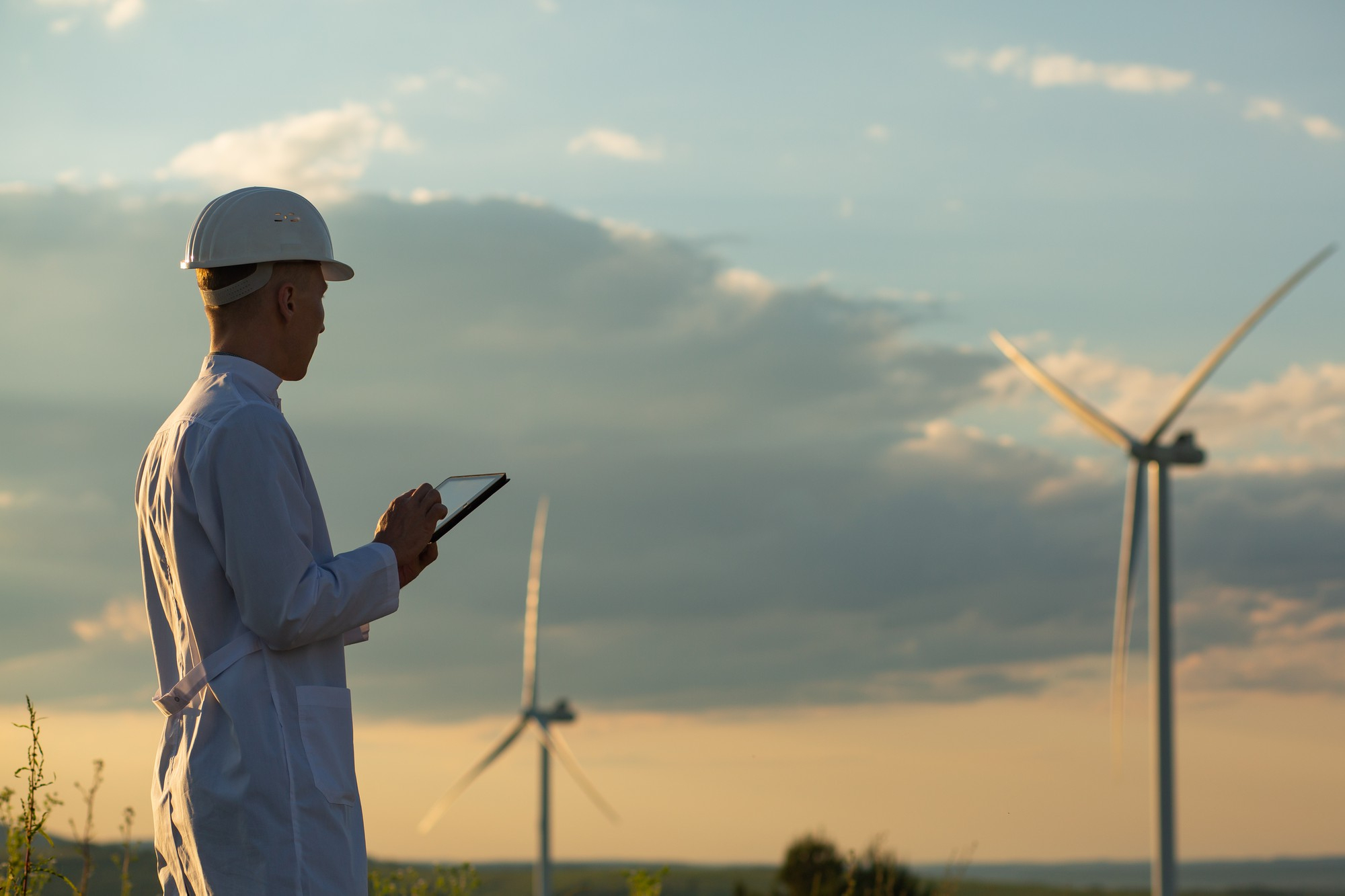 Digitalizing Wind Energy: How to Capture Data from Wind?

Renewable energy is a very important issue for people and the planet. Currently, we rely mainly on non-renewable sources such as coal, oil. However, nuclear energy is widely used to meet the needs of societies. Wind energy is one of the more attractive alternatives – by using natural meteorological phenomena we are able to obtain energy in harmony with the environment.

Energy extraction from wind is, in a nutshell, the use of this atmospheric phenomenon to drive wind turbines. The wind hits the blades of the turbine and the turbine is set in motion, generating electricity in the generator. Thus, it is possible to create electricity.

Turbines can be divided into inland and offshore, with the latter being located, for example, in the open sea where, along with the sea current, there are very strong winds that are crucial for generating electricity.

Man has been using wind to power the devices he creates for centuries. When electricity was not yet generated, the wind powered mills that ground grain. Thus, humans were able to efficiently produce food and store it in prepared granaries. The history of man using the wind is thus very rich, and as a civilization we were well aware of the power of this element.

It can be harnessed in ways that are good for us, and the new technologies that are emerging all the time and the ability to use digitization to improve the operation of wind turbines is the direction that the energy industry will be heading in the coming years.

How to produce wind energy?

Wind energy is energy of solar origin. The phenomenon of wind is mainly associated with the uneven heating of air masses by solar radiation, the unevenness of the earth’s surface and the rotation of the globe. Kinetic energy is converted into mechanical energy by means of wind turbines. The energy generated in this way can be used for specific tasks (e.g. pumping water) or by using a generator to produce electricity.

The first attempts to generate electricity using wind power were made as early as the 19th century, but it is only in recent years that this method has begun to be used on a larger scale. For this purpose, wind turbines are built – tall towers with a rotor consisting of blades and a hub, connected to a generator that produces electricity. The amount of electricity produced depends on the strength of the wind, the size of the blades and the height of the wind turbine.

Often several such wind turbines are built to form a wind farm, producing a larger amount of energy. Wind turbines can be divided into small and large wind turbines. Small wind turbines, with a simpler structure, include those that operate for their own needs as well as those with power output below 1 MW. Large turbines, on the other hand, are characterized by power output of 3MW and more.

In order to use wind energy for electricity production, appropriate conditions are required, i.e. constant wind speed. Wind turbines usually operate when the wind speed ranges from 5 to 25 m/s, with speeds between 15 and 20 m/s considered optimal. Velocities too low make it impossible to generate electricity with sufficient power, while too high (more than 30 m/s) may lead to mechanical damage of the wind turbine.

Also important is the location of the wind turbine, which must take into account the roughness of the terrain and the impact of terrain obstacles on the wind flow. The rotor should not be located in a turbulent zone, where air turbulence reduces the turbine’s efficiency and may damage its structure. 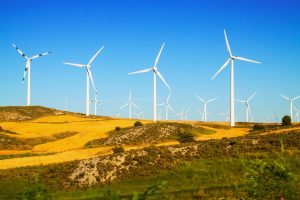 A wind farm is a set of windmills connected to the grid in one place. For the success of the investment the choice of location is crucial. This involves exclusion of protected areas, maintaining appropriate distances and access to the power grid. Wind farms interfere with the landscape, but specialists’ observations confirm that they pose little threat to animals and birds.

Compared to the onshore wind energy sector, offshore wind farms are characterised by higher turbine efficiency, associated with greater stability and force of the wind blowing in offshore areas, as well as lack of technological limitations – turbines installed offshore may be much larger and more effective.

Apart from environmental threats, legal and administrative difficulties related to the identification of possible locations for the construction of offshore wind farms, an unresolved issue is the possibility to connect newly developed offshore projects to the grid. The energy produced in the turbine goes to the substation, where it is converted to a higher voltage (which minimizes energy losses during transport). The energy is then transmitted via export cables to a substation onshore, where it is converted to the voltage typical for the particular project or country.

Pros and cons of wind energy

The main advantage of converting wind to electricity is the issue of cost-effectiveness. Renewable sources of energy are obtained for free and can be used indefinitely, resulting in a significant reduction in electricity bills and thus a considerable saving. Of course, it must be taken into account that often wind turbines are not enough to fully generate electricity. Much depends on the climate and weather conditions.

Drawing electricity from the wind does not produce any toxic substances that have a negative impact on our health and environment. It does not emit carbon dioxide into the air. Besides, it is a recoverable source that never runs out unlike coal or oil. Wind energy can be used on small farms that are not connected to the electricity grid. This makes it possible for almost any location to have cheap electricity to power individual appliances.

One of the main disadvantages is that the amount of electricity generated can fluctuate and sometimes not reach enough power to power electrical appliances. Weather conditions and adequate wind intensity are important in this regard. Unfortunately, wind turbines will not work in every location. Lack of adequate wind power may result in complete lack of electricity, which is why an additional source of power is often needed. Some wind turbines make a lot of noise, which can be problematic for people who live near wind turbines. Such noise can also be a problem for animals living in the sea. In addition, tall wind turbines can cause radar interference.

Since wind energy is a very attractive direction in the overall energy industry, it is subject to exactly the same transformations as other sectors that produce “critical goods” such as fuel, energy, services. It is only on the surface that digitalization can bypass wind energy: if you think about it carefully, you will see that all methods of connecting wind energy to the world of new digital technologies can be very attractive and worthwhile. Especially that the energy industry is still looking for such methods – we are in one of the crucial phases of introducing high-tech solutions not only to wind turbines but also to other ways of obtaining clean and green energy.

Multinationals, when investing in digital systems, often fail in getting real returns on those investments. To avoid these costly mistakes, it is essential to understand that you must first determine what you want the returns from using digital tools to be before you begin implementing them. Once the goals of the investment are established, a strategy must be developed and the appropriate partners must be selected or technologies acquired. This will allow you to better focus on the transformation, which as the results show, is not that simple.

While artificial intelligence and machine learning are colloquial buzzwords, they have the potential to create serious turmoil in the wind sector. For an AI system to showcase its full power, it is necessary to provide it with a lot of data and information. For this, a digital infrastructure compatible with machine learning systems is essential. Many companies, despite using AI systems to collect and store data from their wind assets, do not focus on their compatibility.

Before implementing an artificial intelligence system to analyze farm data, it is necessary to make the databases compatible. Only by doing so will investment in a machine learning system be able to show its full benefits. The challenge lies, for example, in unifying how data from field reports etc. is stored. Cloud-based systems help with this, but they need to be implemented. 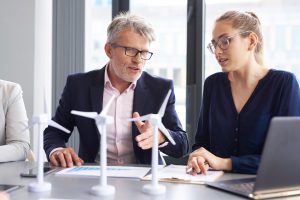 Some companies are concerned about the impact of introducing AI into wind power. Such a situation could be the detection of non-existent faults, for example. If this type of detection is excessive, the operational costs associated with each inspection will exceed the gains from using digital solutions. Additionally, an excessive number of such problems may cause a decrease in trust to the system, which will translate into problems in its further implementation.

Therefore, it is very important to trust the company that will be able to solve the problems that may arise after the implementation of the system. Eliminating them at the very beginning will make the investment in digitalization pay off very quickly in the form of, for example, higher efficiency of the entire wind farm.

There are already solutions available in wind energy that allow you to suspect the current converter, generator and transformer parameters. Moreover, it is possible to adjust their operating parameters to changing needs and conditions, and to set other parameters of the wind turbines themselves to respond to changing meteorological conditions (based – again – on new technologies and predictive analysis of weather and meteorological phenomena). Thus, it is possible to optimize the performance of a wind farm both offshore and onshore automatically, without using human resources.

There are other applications of digitalization in the context of wind energy. Wind turbines and their hardware and infrastructure are prone to failure – primarily due to the multitude of very high mass components rotating at enormous speeds. With this in mind, keeping the turbines running is a very difficult task. Although, of course, it is not impossible, and achieving the best possible results can be achieved through predictive analytics.

Advanced artificial intelligence models are able to single out parts that need to be replaced, what might break down soon, what components are worth auditing and where periodic maintenance is best. Again, we use fewer employees for manual inspections and avoid unnecessary maintenance. The digitalization of wind energy is an incredible opportunity to make green forms of energy generation even more environmentally friendly.

If we combine the acquisition of “green” energy with digitalization – we have a great opportunity to improve the condition of our planet. This is a challenge and a great responsibility. But it is possible, and in many cases – it is already happening. If you are developing a wind energy or renewable energy project and need support in digitizing it – contact Concise Software. We will show you the way that is worth following.

You may like to read:
Agritech: Driving the future of agriculture with innovative technologies
Carbon Footprint Calculator – 6 Apps that Help You to Reduce Your CO2 Emissions
Carbon neutral cars – what’s new in the automotive industry?
Carbon neutral companies – who actively helps the environment?
Smart City – How to Improve the Urban Quality of Life in a Smart Way?
How does greentech help our environment? 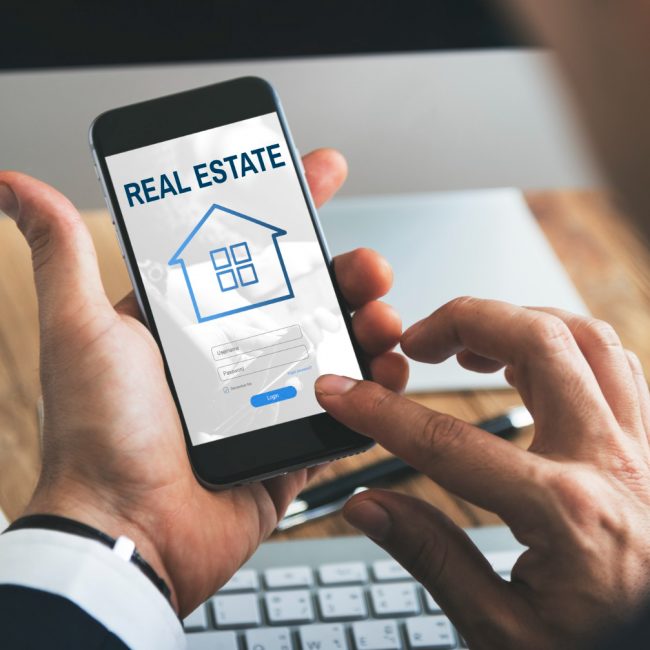 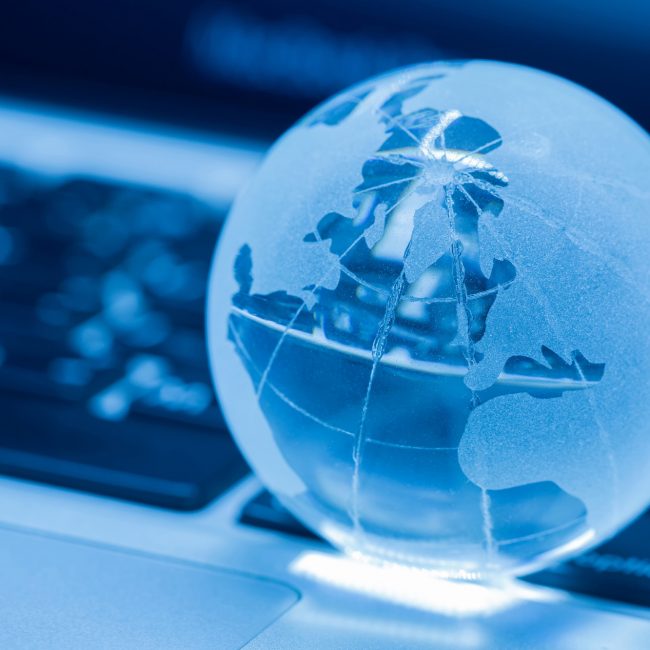 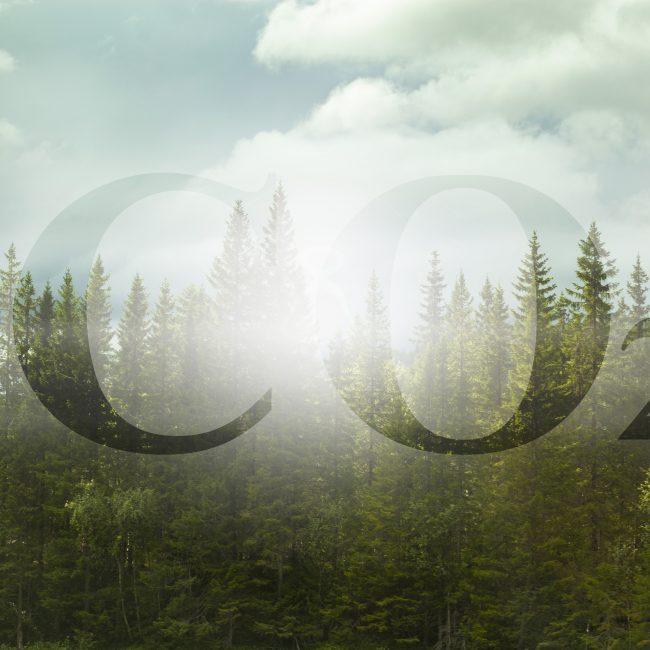 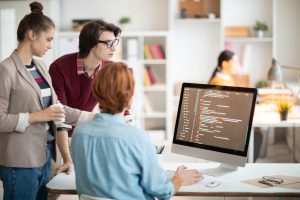 Domain Driven Design: aggregates implementation
next post
JWT authorization: How does it work for web applications? 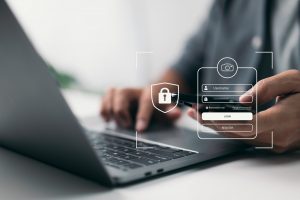