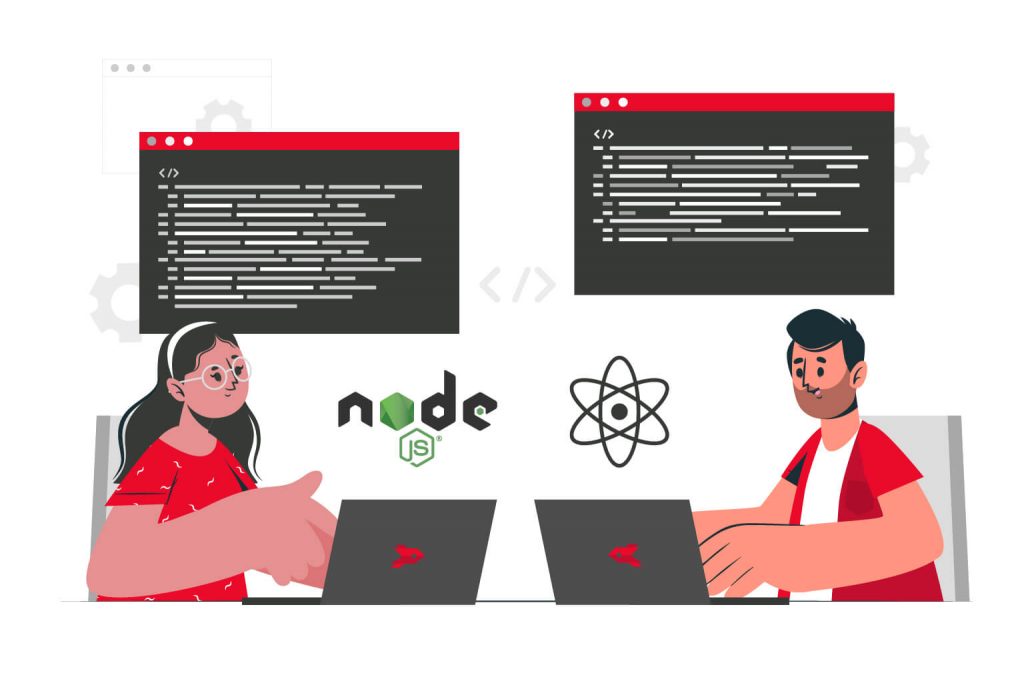 What is the difference between ReactJS and NodeJS?

To have the broadest possible understanding of technologies that are only seemingly very similar – it’s worth starting with the basics. Sometimes it may be better to choose NodeJS over ReactJS due to small, yet significant differences. Sometimes it can also be difficult to pick a clear winner – but we’ll help you with that by considering what NodeJS is, what ReactJS is, and how they might differ. It turns out that it is not as simple as it seems.

To some, it may seem on the surface that the choice of technologies is fabulously easy. Instead, it may turn out that sometimes one small difference will make you change your original idea. It turns out that projects written in different technologies can have completely different…. properties. They may behave slightly differently and require slightly different attention. It is necessary to take such things into account even before we start real work on the project. If we don’t – we may be surprised by unexpected results already “after the start of the project”. But rest assured – most likely, if you hit the right software house, it will quickly explain to you the basic issues and differences. We do this already and show proven solutions that are used by many clients. So what is it like? What is NodeJS? What is ReactJS? And where are the differences among others?

ReactJS is one of the main and most popular JavaScript frameworks

It is used to build complex user interfaces. It is a tool for people who work with JavaScript programming language and front-end technologies on a daily basis. It allows to significantly speed up the work of a front-end developer and increase the speed of applications. ReactJS is a JavaScript framework that was created to streamline interface design. Although interface development tools and frameworks to facilitate this are numerous, it is ReactJS that presents a new and innovative approach to this task. Learning ReactJS is for people who have already mastered JavaScript and want to expand their skills.

Find out how can we help you!

From the programmer’s side, ReactJS is definitely fast, and once you become proficient, you can write the view layer of a web application quite quickly and transparently. By not using the MVC pattern or complicated file structure, even inexperienced users can quickly start writing functional applications. On top of that, it is developed by Facebook, among others, so there is unlikely to be any need to worry about future updates and bug fixes. There is also no shortage of ready-made React components, which can be downloaded, for example, using the npm tool. Here it should be clear, ReactJS is the master here – but this is what Facebook had in mind when it was created. What was required was to adapt the entire technology in such a way that it was geared towards speed and reliability. Facebook undeniably gains from this – also through the contributions of other developers who create new React solutions, creating a kind of ecosystem.

React is the world’s most popular JavaScript UI library for creating modern applications.

React and other frameworks are distinguished by React’s robust capabilities and concepts, such as JSX, virtual DOM and components. You don’t have to worry about libraries at first when you understand React. First learn the basics of React and how it differs from other frameworks and libraries. After a few framework projects, you will feel the need to use specific libraries to move on. Many libraries can solve almost any problem, so choose one with excellent documentation to start with. React has a larger community than competing libraries such as Angular and Vue. The job market for people who want to learn React seems promising, with many positions available. The road to mastering the React framework is not easy, but ultimately rewarding. React is a technology that offers many opportunities for those who learn it to become great developers.

Why should someone use React?

There are many open source systems that facilitate the development of front-end applications, such as Angular. Here, let’s look at the advantages of React over other competing technologies or frameworks. Since the front-end world is evolving day by day, spending time learning a new framework is a challenge – especially when that framework may end up being a dead end. With so many companies using React JS, including some of the world’s most recognizable brands, React must provide extraordinary benefits. React.js is currently being used on websites from companies such as Netflix, Imgur, PayPal, Archive.org, Gamepedia, SeatGeek, HelloSign and Walmart. In 2015, React.js and React Native were the two most popular open source projects on GitHub. So React is by far one of the most popular solutions of its kind on the market and allows you to develop many websites.

Now let’s consider what is NodeJS? It’s the king of servers

Node.js is an open-source, cross-platform JavaScript execution environment that runs on servers. Since its release, this platform has become extremely popular and now plays a very important role in the field of web development. If we consider the number of stars the project has collected on GitHub,it is a very, very popular project. The Node.js platform is based on Google’s V8 JavaScript engine, which is used in the Google Chrome browser. This platform is mainly used for web server development, but its scope is not limited to that. Proof that Node.js works is that many companies and corporations are using this environment. These include – Aliexpress, Ebay, Linkedln, MasterCard, among others.

It’s worth moving on to explain what node.js is, because even for novice programmers, node.js is still an unsolved mystery

Well, in the simplest terms, it is a huge runtime environment that was created to execute JavaScript code. At this point, it should be noted that until now the only way for developers to run their JavaScript code, with the help of typing it into the browser. Nevertheless, today it is node.js that can work completely independently of the browser, and what’s more, it allows you to run your prepared JavaScript code outside the browser as well. Node.js is thus a kind of runtime environment that also allows you to create a web application in a much easier way than before. What’s more, it’s also a tool that will make it easier to create server-side applications, as well as all kinds of scripts and libraries. In addition, this environment works with operating systems such as Linux, Mac OS and Windows and can be run literally on any of them.

Find out how can we help you!

In summary, it can be said that when using node.js you can create a web application using frameworks such as the famous and mentioned here React or Angular, as well as Vue or Svelte. What’s more, it is possible to create server-side applications, again using well-known frameworks such as Express, Nest and Koa. It is worth mentioning at this point that applications can be created in both JavaScript and TypeScript. Nevertheless, it is worth noting that node.js itself uses the developed V8 engine. This, in turn, is open-source software, similar to that on which the Google Chrome browser is built. Experts agree that it is node.js that has greatly accelerated the development of applications, as well as the language itself, which is JavaScript. What’s more, each of the currently available frameworks, thanks to which it is possible to create web applications, must have node.js installed. Let’s not hide the fact that programmers still have the capacity to undertake the development of web applications only with the help of a web browser. Nevertheless, it is impossible to create a professional and advanced application without the help of the invaluable node.js.

ReactJS and NodeJS, which is better to choose?

As you can see, the two technologies differ somewhat in their applications and their applicability. Their pedigree is also slightly different, and for this reason they should sometimes be used not so much interchangeably, but sometimes even in mutual cooperation. It should be weighed against the fact that it is not possible to clearly indicate the project that should be created in a particular way. Sometimes it is necessary to better understand the intentions of the other party in order to jointly come to an agreement that will bear very strong fruit in the future. It should be remembered that relationships are the most important thing we should pride ourselves on – hence the way to develop a way to approach a problem should go through quality consultation before creating a project.

What we know about technologies is that they sometimes work better in certain spheres. NodeJS and ReactJS are actually something similar, yet very different for good measure. You need to be careful when making final decisions and not be fooled by the often nuances that can distort the proper view of the matter. It’s also not worth getting discouraged – there are a whole lot of judgments about ReactJS and NodeJS – in fact, as many as there are programmers in the world. Everyone will be able to say something about it – only we have to decide the future of our project, not someone else’s judgments.

If you don’t know what technology is most important for you – we will tell you! Get back to us and together let’s find all the pros and cons of using specific technologies – not just the ones covered in this article. Contact us today!

You may like to read:
5 reasons to build your backend using Node.js
Node.js vs Python: Which one to choose for your project?
From underground to enterprise – story of the Node.JS
6 examples of enterprise Node.js projects
The most common Node.js backend interview mistake – answered by the Concise Software!