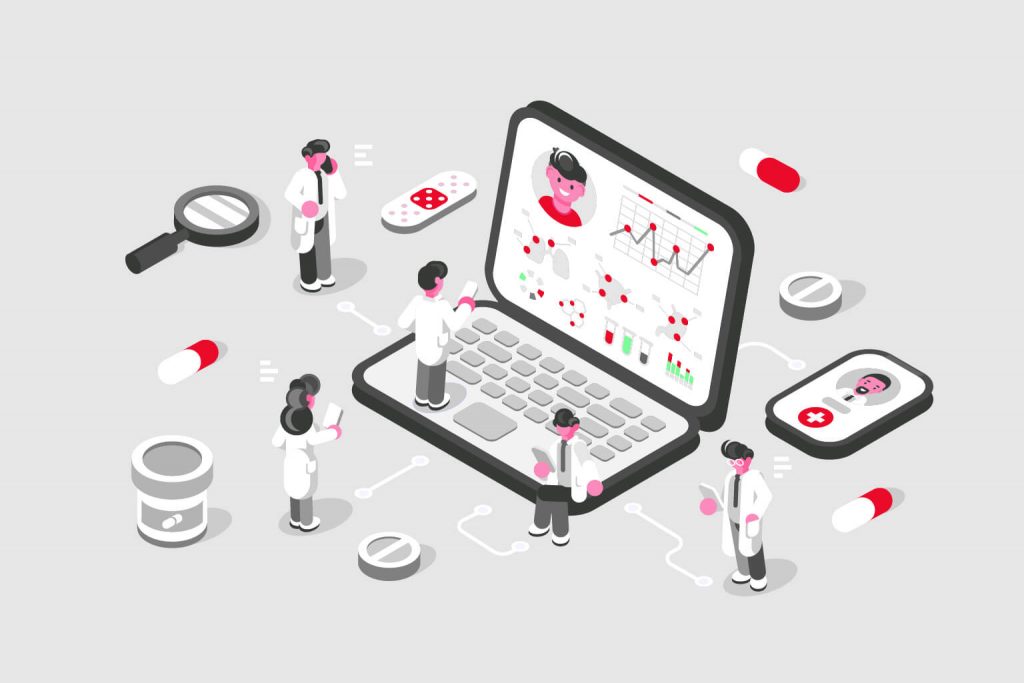 Medtech is one of the fastest growing technology industries. Human health is a huge value, which is why so many sick people are looking for methods to make them more comfortable or focus on prevention. Check out what medtech technologies are among the most interesting or important at the moment. Thanks to them, the comfort of life for all of us will stand at a very high level. This is definitely something that is changing the world.

Over the past few years, medical technologies (or simply medtech) have become increasingly sophisticated, refined and innovative. Many companies have decided to try their hand at this business and have begun to look for new methods of improving human health. At present, the most important medtech development directions are being produced in the market, which allow many people to benefit from modern medical services. Moreover, the direction of medtech development is dictated by the desire to support people who, for many reasons, cannot afford good medical care. Automation, AI support and simplicity mean that healthcare costs can become lower – just thanks to medtech!

Artificial intelligence (AI) has been capturing the imagination of scientists, artists and mere mortals for years. While researchers outdo each other in working on systems that would resemble the human brain as closely as possible, enthusiasts dwell on their potential applications and skeptics dwell on their unpredictable consequences. And what attitude to artificial intelligence do representatives of the medical world have? Could special computers make doctors’ work easier? Recent studies indicate that yes.

Orthopedists at Danderyds Hospital in Sweden decided to test whether computers equipped with artificial intelligence would work well for radiologists. To do so, they extracted 256,000 X-ray examinations taken for fractures of the hand, wrist or ankle bones from the archives. Two-thirds of these were analyzed by the system with the help of specialists to train themselves to recognize pathology, and they worked on the rest on their own. It turned out that the learning did not go to waste – the computer identified fractures with the same accuracy as two radiologists, who evaluated the images at the same time for comparison. Since the system achieves better results the more data it analyzes, the doctors are already planning a follow-up study, this time using the hospital’s entire archive of more than a million images. In their view, artificial intelligence can promote uniformity in the results issued and faster diagnosis, and facilitate the collection of data for scientific papers. But these are not the only possibilities of AI.

Artificial intelligence in global medicine has been around for many. As of 2018, there is an FDA-certified algorithm that can diagnose on its own or be part of a diagnosis. This is an algorithm for examining the fundus of the eye for diabetic retinopathy. Another algorithm in use, designed to evaluate breast mammography, reduces false-negative results by about 9 percent. This means, Kornowska says, that potentially tens of thousands of patients can be diagnosed much faster for cancer than without the use of AI. This is projected to be one of the most important developments in medtech.

The basic type of telemedicine is the telephone consultation, which is a follow-up visit via video call to a doctor. It is usually used a few days after a traditional visit to a doctor’s office, to describe the condition of health after the specialist’s recommendations. In this way, it is also possible to obtain a prescription without leaving home, saving time. In addition, telemedicine makes it possible to minimize the number of visits to medical facilities. Among other things, it allows us to take care of a loved one remotely, when that person, for example, is elderly and ill, and their condition requires constant monitoring.

Another type of telemedicine is the monitoring and diagnosis of certain patient parameters using special devices or phone applications. The doctor gets the information, analyzes it and is able to make a diagnosis. Telemedicine is a good solution for busy, active people, those with diabetes, hypertension or asthma. In many situations, it saves time and is simply a convenient way to monitor one’s health. The main group benefiting from telemedicine, however, are senior citizens. Constant monitoring of their health parameters at a distance allows medical personnel to notice alarming changes and react in time, and this is especially important in the elderly.

VR in medicine? It’s not a joke, it’s already happening

The spectrum of VR applications in medicine is really wide. Although the field is relatively young, there are often newer and newer examples of the positive impact of VR technology on the lives of patients and the work of doctors. Interestingly, the same goggles we use at home, such as the HTC Vive, are actually used in medicine. This confirms that these goggles are also suitable for professional use. For some people, it’s heartening to know that using the Vive you can both play “Half-Life: Alyx” and simulate open heart surgery. In 2016, Dr. Shafi Ahmed performed the first VR surgery, which could be viewed online in real time. Since then, VR’s capabilities have grown significantly. The technology allows for more than just a passive view of surgery from the surgeon’s perspective. It is being used to train future surgeons and simulate extremely complex surgeries that are to involve a number of doctors from different specialties, such as a face transplant.

It is important to remember that virtual reality offers the opportunity to even tangibly experience the work of a surgeon by looking over his shoulder. With cameras that convert images into VR, surgeons can broadcast surgeries around the world to teach medical students from other continents. In American medical schools, devices like HoloLens are being used more and more. But that’s not all the possibilities for using VR in medicine!

For patients recovering from a cranial injury or stroke, time is of the essence. The earlier rehabilitation begins, the greater the chance of successfully recovering lost function. Neuro Rehab VR has developed a gamification-based rehabilitation tool. Working with doctors and therapists, engineers have created a set of machine learning-based exercises tailored to individual patients’ needs. The goal is simple – to make rehabilitation more enjoyable and thus more engaging for patients.

Robotics in medicine is a huge opportunity for many people

Robotics in the modern world has long since entered under the roofs of our homes and factories. Advances in this field have meant that medical robots are also beginning to play an increasingly important role in treating our bodies as well. Practically every day, engineers from all over the world develop new solutions that inevitably push us into the arms of the future. A future in which medical robots, not humans, will treat us. While we will still have to wait for such progress, we already have access to technologies that will change medicine and approaches to it in the near future. Here are examples of robots that will contribute to this.

DaVinci is one of the world’s most recognized medical robots. It was designed to assist surgeons during operations. Thanks to him, the line between a surgical tool and a robot has begun to blur. During surgery, it is completely controlled by the doctor, but its capabilities are astonishing.

This medical robot is able to perform operations with unprecedented precision with the help of the doctor. In doing so, it maintains the least possible interference with the human body. DaVinci has been under development for more than 18 years, and as a result, it is becoming more advanced all the time. Given this, we can expect the robot to become increasingly autonomous.

Researchers at MIT have created a robotic prosthesis equipped with gyroscopes. Thanks to them, it is able to move in three dimensions. Its mechanical joints move at 750 times per minute. Engineers are already constructing prostheses that are covered with artificial skin and are connected to the human nervous system.

This type of medical robots can change the lives of paralyzed people and make them walk again. In addition, they will be able to be used to treat people with various types of congenital defects of the motor system. They will also help in the rehabilitation of people who have suffered muscle injuries. In a word, exoskeletons will help in various types of rehabilitation.

Currently, exoskeletons work through special software. They perform movements that are predetermined. However, as the human-machine interface progresses, they will be able to be controlled directly by the patient’s brain. We expect that more sophisticated and advanced solutions for robotics aimed at people with disabilities will soon follow.

The wearables market is one of the most rapidly growing segments from the technology industry. Such devices include activity-monitoring wristbands, smart watches, smart clothing or sensors placed directly on the body.

For now, attempts to use wearable devices in the medical field are being made in remote monitoring of patients, especially the elderly. Such a device is, for example, HealthPatch, a sensor placed in a patch that measures heart rate (an ECG reading is also taken), respiratory rate, skin temperature, as well as assessing posture and recording how often the wearer has imbalances.

An example of a recent device formerly intended for athletes, but now also aimed at people undergoing rehabilitation after injury or stroke, are the Sensoria Fitness socks. Sensors placed in the socks not only measure the number of steps the wearer has taken or his speed, but also the positioning of the legs or the distribution of weight during movement. It also turns out that they work much better than armbands worn on the wrist in monitoring physical activity in people with limited mobility, such as precisely the elderly, patients after injury or stroke.

Medtech is an opportunity for all of us!

Custom healthcare software development represents an opportunity for many people to live long, satisfying and healthy lives. It is important to remember that the development of these inventions is the best thing that could have happened to us.

Do you have an idea for an interesting medtech? Do you want to change your world for the better? Tell us about it – we’ll show you how to put it into practice. Get in touch with Concise Software!

This may interest you:
Telehealth – Your Ticket to On-Demand Healthcare Services
4 benefits of Internet of Things for healthcare
The Rising Popularity of Apps for Mental Health
Virtual Reality in Healthcare – Transforming Medical Education and Patient Care
Artificial Intelligence in Healthcare: Key Trend in Digital Transformation
Big Data in Healthcare – Unlocking the Potential of Medical Records
Predictive Analytics in Healthcare – Staying One Step Ahead of Emergency
Introduction to EHR – What are the Benefits of Electronic Health Records?
HIPAA guidelines for healthcare apps development
Your Guide to the Benefits of Telemedicine Apps
Wearable Devices: Embracing Technology for Better Patient Care
Why should we worry about healthtech? Facts and thoughts